We awoke to the sound of avalanches, which here in N. Ctrl Jersey means tree limbs snapping under the heft of ice deposited from on high. And no heat or electric: that condition prevailed even as we chopped through ice prior to a strictly local (i.e. no Jersey City) ride with Charlie the Gent and Dr. Chew.

I was determined not to miss another weekly session of ‘Religion and the American Self,’ not with Patti Smith cued up and ready to rock. Back came the power, off we traveled via N.J. Transit, making up for months of woeful service; on time we arrived for the evening class albeit a tad rusty from missing last Wed. night.

Haltingly at first then in awakening mode we pursued themes of Patti Smith’s reverence for integral elements of what Norman Mailer dubbed the ‘underground river’ coursing and sourcing thru a subterranean creative vein linking Whitman to the Beats to Charlie Parker and John Coltrane to Janis Joplin, Jimi Hendrix, to the sturdily self-effacing Ms. Smith herself. She’s a venerator, we suggested: a curator and genealogist of the underground river and its pioneer/explorers, who so often found themselves in Gotham.

The Coltrane influence and mystique is striking in Patti Smith’s story: she describes happening on his funeral shortly after arriving in New York City in summer ’67. By the time Patti was photographed holding a copy of ‘A Love Supreme’ she was closely connected to Fred ‘Sonic’ Smith, who among rockers was as dedicated to Trane’s legacy as anyone (the Byrds had paid their deeply felt homage in ‘Eight Miles High’). Fred Smith’s MC5 band mate Rob Tyner adopted the surname of  Coltrane’s longtime, one of a kind pianist. 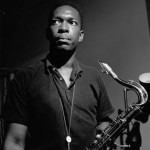 Charlie loves to chant ‘Love Supreme’ in the car with his dad. Sometimes it feels as though we’re channeling some of JC’s vast spiritual discipline. Sometimes in the classroom my own less disciplined version of the later Coltrane—he of the 45 minute solos (all by the way well worth attentive listens, especially those traded with the great Eric Dolphy)—breaks out; that may be the ADHD king talking it’s a mighty slim line, with Charlie found on the saving side.